The Port Townsend shanty band called Nelson's Blood was born out of the monthly shanty sings that occurred at the Maritime Center. These 'sings' were established initially by Lee Erickson. A few of us were idly musing on the idea of singing-out at gigs together, and the ball started rolling.
The original band was made up of (from left to right on the photo below) Chris Gilbert, Jim Scarantino, Annie Scarborough, Mike James, Michael (Tug) Buse, Val James, Jay Hagar and Steve Blakeslee.
Click images to enlarge

Work commitments meant that Tug couldn't make many gigs, so we searched around and found a replacement...recognize him?

And, then I thought "let's go the whole hog and put this crew to sea!" And, our fearless "un-leader" Mike just had to go and rest his elbow on the barrel of Nelson's Blood.*

Well, a little while later Jim felt the pull of country music and had less time for shanty singing, so we looked around and found this guy on the streets. (Not really, I was just kidding there.) We met-up with Pablo Cohn and his wife Devon at the Alchemy Bar after one of the shanty sings. Pablo came with his own history of shanty singing down in California, and was instantly recruited.

Pablo Cohn
Pushing my Photoshop skills to the limit we added him to the crew...(can you see the join? Hah!) 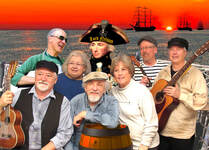 The band played many venues in the Pacific Northwest during its brief few years, including Northwest Folklife, Port Angeles Maritime Festival, The Candlelight Concert at the Trinity United Methodist Church, many yacht clubs and private events. We sadly disbanded in 2018, but I have a feeling we haven't heard the last Rollicking Roaring Shanty in Port Townsend.

OK, for those who do not know...I love telling this story before singing the famous shanty "Nelson's Blood". (Words follow below.)
We all know that Admiral Lord Nelson was killed at sea in 1805 during the Battle of Trafalgar, off the Spanish coast.
When word got back to England the order was swiftly dispatched to the ship - "preserve Nelson's body at all costs", for an open coffin State funeral in London. The story goes that they placed his body in a barrel of rum for the journey. (Although some say that it was a barrel of brandy, but that doesn't fit the story.)
As you might know, it was tradition in the Royal Navy to provide a tot of rum to each crew member at the end of each hard day's work on board. On the way back, the bursar ran out of rum. This did not go down well with the crew, so after lights-out some of them made their way to the barrel containing Nelson and helped themselves to the rum, which by then had mingled somewhat with the blood of Nelson.
"Yuk", you might say.
And so from that time forward "Nelson' Blood" became a euphemism for Rum. And a tot of rum became known as "drop of Nelson's Blood".